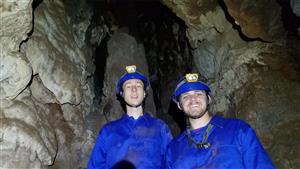 2017 Pine-Richland High School graduate Noah Adams earned a once in a lifetime opportunity this summer. He had the opportunity to work aongside world renowned paleoanthropologist Dr. Lee Berger in South Africa.  Noah was one of only two Eagle Scouts selected across the country to participate in the 2017 National Eeagle Scout Association Eagle Scout Paleoanthropologist program. Dr. Berger and Noah worked to unearth two-million-year-old fossils of a recently discovered early-human species. To learn first hand about the expediation read Noah's report and blog on his experiences.

Before going on the NESA Expedition, I had never considered pursuing a career in the field of paleoanthropology. I always thought of anthropology in the specific context of cultural anthropology, without regard to the other types such as paleo, linguistic, or forensic anthropology. The time I spent in South Africa working with the team at the University of the Witwatersrand (Wits) provided the opportunity to glimpse the daily life of paleoanthropologists and gave me a new appreciation for this branch of anthropology.

While in South Africa, I had countless new experiences ranging from trying South African crème soda (they claim it tastes like flowers as opposed to the variety in the states that tastes like melted vanilla ice cream) to being chased by a herd of elephants. As great as the tourist experiences such as going on a safari were, the part of the program I treasure most is the time spent working in the African Bush with the Wits Team.

Anyone with enough money can buy a ticket to South Africa, go on a safari, and eat warthog. However, no monetary value can be placed on the one-of-a-kind opportunity, provided to Ethan and me by NESA and the team at the University, to work on world-class paleoanthropological dig sites and create maps of caves which at some stage may be used to find the bones needed to further clarify the history of the human race. These two weeks taught me skills such as how to dig for bones, how to create a 3d coordinate plane for dig sites, how to map caves using a laser measuring device, and how to analyze different types of rock. I will carry these skills and experiences with me for a lifetime, and I hope I can utilize them professionally in the future.

Once again, a very big thank you to all of you who made this possible! The expedition was definitely the highlight of my summer and I cherish the relationships I formed with everyone in South Africa, and I hope to stay in touch for years to come.

Perhaps the most common question I received regarding the expedition was "What was a typical day like?" This post, and a second one to come, will address that by describing a day at each of the excavation sites we visited.

The first part of the expedition involved what the researchers referred to as caving and exploration. This essentially involved driving the buggy into the South African bush, hiking off trail, looking for undiscovered caves or revisiting older caves with outdated GPS information. The day outlined in this post was a bit more exciting than the other two days since an extremely large number of hominid (a primate of a family ( Hominidae ) that includes humans and their fossil ancestors and also (in recent systems) at least some of the great apes) fossils were discovered, and continue to be discovered, in the Rising Star Cave System, but all of the days were jam packed with intellectual stimulation.

We (Ethan, my fellow Eagle Scout and World Explorer) were picked up from our hotel around 07:45 and driven to the Rising Star Cave site. Then, we donned some coveralls and headed into the cave with Rick Hunter (caver), Dr. Marina Elliott (researcher), Maropeng (caver) and Mathabella (caver). We started out in an easier section of the cave and worked our way up to more difficult sections such as the Superman Crawl and the Postbox. We attempted the upside down turn around, but decided to call it a day without making it through that extremely awkward section of cave.

Along the way, we also saw the Dragon's Back, a particularly treacherous, exposed, 15m climb, and the Berger Box, so named due to renowned scientist Dr. Lee Berger getting stuck in that particular section for multiple hours.

After touring the cave and helping the researchers collect water bottles which recorded the amount of sediment in the cave water, we headed for lunch at the Maropeng visitor centre. I had a chakalaka salad (a mix of beans, cabbage, and spices made into a relish) burger before touring the museum about the Cradle of Humankind.

Above is a photo of the Homo naledi bones, currently on display in the Maropeng Visitor Centre museum.

After the museum, we were dropped off at our hotel where we showered before dinner at the hotel restaurant with our exploration team (usually we ate lunch and dinner at the hotel restaurant by ourselves). Dinner was a buffet, but some highlights included snails (which we originally understood to be snake), ostrich cold cuts and extremely spicy curry.

After dinner we went to bed and prepared for our next day of exploration!

Perhaps the most exciting story from my time in South Africa comes from the Safari Game Drive we took on the weekend.

Our Safari was a self-guided tour through Pilanesberg National Park, one of the largest and most well respected nature reserves in South Africa. Although Kruger National Park is larger, our guide from the University of the Witwatersrand, Mathabella, argued that since Pilanesberg has a larger ratio of animals to land area, it is actually the best nature reserve in the country.

In any case, we were in for a long day of driving around. We saw all the essentials: hippos, giraffe, rhinos, lions, kudu, impala, guinea fowl, warthogs, wildebeest, meerkats and baboons. But right as we decided to make our way to the park’s central visitors center for some lunch, we encountered some elephants. The road was in a U shape, with the bottom of the U being a bridge over a small stream. Immediately after crossing the stream we had to wait in line for the elephants to cross the road. When we joined the line, there were about four or five cars in front of us, but soon, there were fifteen or twenty in total. Out of the blue, a few teenage elephants turned and started sauntering towards the car at the front of the line. Elephants often only fake charge at cars, but you have to back up irregardless, as you wouldn’t know for sure if it was a fake charge until it was too late. So there we were, backing up away from the elephant, at least until our guide backed us into a bush! 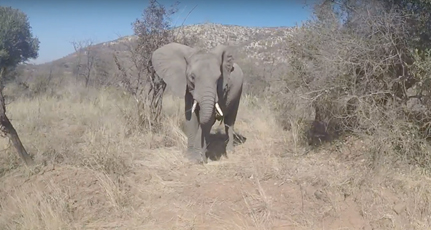 Three or four cars passed us as we sat there trying to maneuver our Ford Ranger Truck out of the shrubs and onto the road. Finally, we were on our way again; this time, with only one car in between us and the elephant. Over the course of the whole ordeal most of the elephants were peaceful, with only a few coming at us at different stages.

We backed up across the river, probably traveling a few hundred meters in reverse, until the first elephant went on its way and left us alone.

So, wanting to get to lunch, we started forwards again. We made it over the river and around the first bend, when all of a sudden a large, male elephant stopped eating the leaves off of a tree turned and trumpeted and stomped right at our buggy as we drove by. The loud noise and sudden nature of it all left us feeling nervous, so we slammed on the gas. We thought we were in the clear since the car in front of us was now out of view, but as soon as we rounded the next bend, we were greeted by that truck going full speed in reverse towards us, with a teenage elephant charging full speed not far behind.

Resultantly, we had to back up past the elephant from before, who, needless to say, was not very happy to see us again. Thankfully, we were able to keep backing up until the elephants got bored and walked off.

The entire experience was certainly the most nerve racking of our time in South Africa, and left us with a sense of respect for the power of the wild animals.

For the other half of the weekdays we weren't exploring, we worked at the Malapa Fossil Site. This was the site which originally brought Lee Berger to fame, when his son Matthew found a hominid clavicle back in September of 2008.

When we first arrived at the site, we were given a brief tour of the building's architecture. I could try and explain it all here, but I am sure I would not do the building justice. Just know that it includes features ranging from movable legs, to BMW experimentally produced sheet metal which was donated to create the thatched appearance of the roof (BMW wanted to see how the material would hold up under no-maintenance, high environmental stress conditions). For a detailed description of the building, I would recommend the one found on the South African magazine, Visi's write up.

The main tasks at the site were split into three main parts: excavation, sorting, and documenting. A typical work day would last about 5 hours. 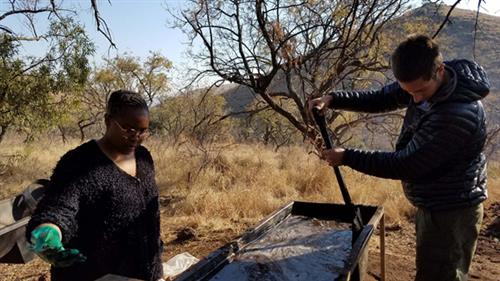 This was the trough we used to get rid of organic matter. At the start of each day, we had to shovel out all the dirt that collected into mud at the bottom of the basin. Here you can see me shoveling the dirt and Pume, a graduate student, with some of the mud on her hands.

All in all, working at Malapa was an eye opening experience that showed Ethan and I another aspect of the daily work of paleoanthropologists. Although the site we worked on was very unique, most of the methodologies we learned while working there are used across the field of paleoanthropology.