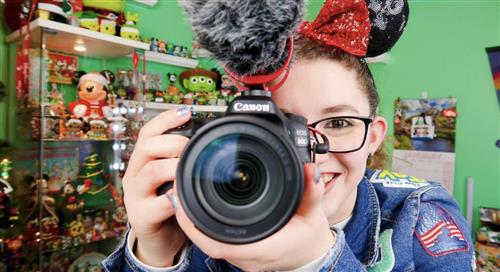 Senior Hailey Rihn has been an integral part of this year’s PRHS musical production of High School Musical. This production, which typically is performed live in front of an audience, has been recorded as if it were a movie. You may watch the film's OFFICIAL trailer, that Hailey edited together, below.

Due to the COVID precautions, the PRHS musical opted to adopt a new, virtual format in order to present the musical to the public. Hailey, who was already serving as the student director of the musical, volunteered to record the entire musical, which she has since edited together to create a movie version of the musical.

Hailey first became involved with the crew side of musicals in her 8th grade, where she was the Stage Manager for the PRMS production of The Lion King. Once she started high school, Hailey became the student director for the PRHS musical, which included Oklahoma!, Guys and Dolls, and The Addams Family. She also was the Stage Manager for the PRHS Fall Play, being involved in the productions of Alice in Wonderland and Peter and the Starcatcher. Additionally, Hailey went back to the PRMS musicals and acted as a mentor to the younger students who were involved in the crew. It is safe to say that Hailey has had a lot of experience in the production aspect of PR musicals.

As far as videography, Hailey has been self-taught in different filming techniques and editing since her 6th grade. She even has her own Youtube channel. Hailey has also filmed other projects ranging all the way from sporting events to weddings.

When filming a virtual musical like PRHS’s production of High School Musical, many different challenges arise when dealing with social distancing and masks. Fortunately, this video format allows for everyone involved in the production to follow all protocols while still creating a quality performance.

Despite the restrictions placed on the musical, Hailey is grateful for the opportunity to showcase her talents in cinematography and help create the musical.

“I am excited to share everything that I have learned myself while still getting to be around my fellow cast and crewmates one last time to make a show that we can all look back on one day,” said Hailey. “This opportunity and project has allowed me to continue to open doors for my future and get even more experience under my belt that I would not have been able to experience without this new version of Musical.”

Creating a video version of the musical also comes with some benefits that would not be possible if the musical was live in-person. Hailey is now able to use different effects, focus more on the action, and showcase everyone in a different way than they have in the past. All of these elements allow for the audience to be brought into the story better than ever before.

Hailey is hopeful that this digital version of High School Musical will be able to reach a bigger audience than before. This is due to the fact that this production will be streamed online to anyone in the world. Additionally, Hailey hopes that this musical will help to inspire other students to get involved in musical theatre in the future.

High School Musical will stream online later this spring. You can read more at www.pinerichland.org/musical.