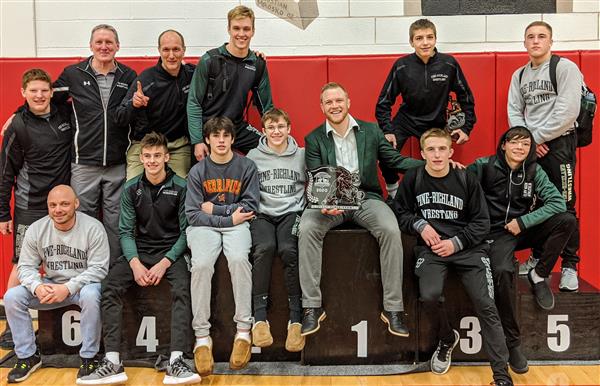 The Allegheny County Wrestling Tournament hosted by Fox Chapel saw something for the first time in 15 years, a Pine-Richland victory. The tournament was loaded with 37 teams from every part of the county including many previous county and even state champions.

Pine-Richland coach Caleb Kolb and the entire team were on pins and needles throughout the championship Saturday night (January 18, 2020).  The Rams were in a tight battle for the team title. Freshman Anthony Ferraro won 14-0 for his third championship this year in as many tournaments.  With that win, the rams needed just one more championship to win the team title. That county championship came when Captain Cole Spencer beat Quaker Valley’s Conner Redinger ranked second in the state to win his second 152-pound championship in three years.  Cole’s record is unblemished and stands at 23 -0.

The Rams prevailed over North Allegheny, 223-222.5. It is just the second county title in Pine-Richland history. In his second year as coach, Kolb was at a loss for words.

“Honestly, I keep telling people I’m speechless,” Kolb said. “I don’t think anyone expected Pine-Richland to come out swinging like that, and I mean it was a half-a-point that we won by. But it was a team effort. All those matches yesterday where we accumulated bonus points paid off tonight, and it’s great to see it. The team really cares about each other on and off the mat. As a team, our philosophy is to be dedicated to our academics, training, and team members”

Second-year Head Coach Caleb Kolb and assistant coaches Tom McGarity and Rob Hunt don’t have any time to rest on their laurels.  The PRHS Varsity Wrestling Team qualified for team Sectional playoffs, so the tight-nit team with a record of 8-2 will be tested again when they wrestle their first playoff match in 13 years versus Fox Chapel this Wednesday, January 22, 2020.