The PR Crew Team competed at the Midwest Scholastic Rowing Championship in Dillon Lake, Ohio on May 8th and 9th.

The men’s team competed in four different events, with the PR team moving to the finals for the Junior 2X and Novice 4+ events. The PR team finished with a bronze medal in the Novice 4+ category. PRHS students Benjamin Pickels, Jordan Arthur, Liam Francis, Ethan Yoon, and Alex Catalano were part of that team.

The women’s team competed in three different events, with the PR team moving to the finals for all three. Unfortunately, poor weather conditions forced the finals to be cancelled for the womens’ teams. The PR women’s team that competed in the Junior 4+ event received a silver medal after the first round. PRHS students Megan Finney, Andi Harper, Sara Welsh, Jill Bish, and Mira DeLisio were part of that team. 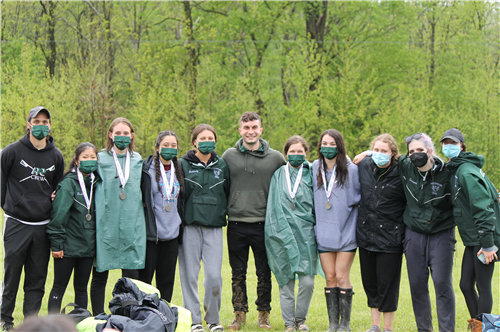