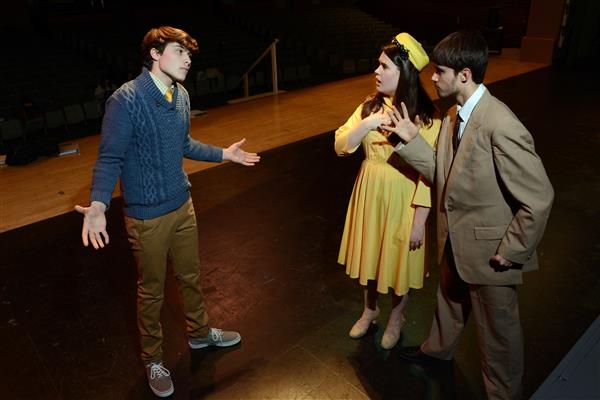 Pine-Richland High School students was able to perform one show of the "Addams Family," due to COVID-19 on March 12, 2020 for families.  That audience was made up of parents enjoyed a comical view into the upside-down world of The Addams Family where feeling sad is their happiness and suffering pain is fun, but falling in love is the same whether you’re an Addams or not.

This hilariously fun musical has the Addams family living in their mysterious Central Park mansion. Though they have lived by their own unique values for hundreds of years, the Addams family faces the challenges of living harmoniously with mere mortals. 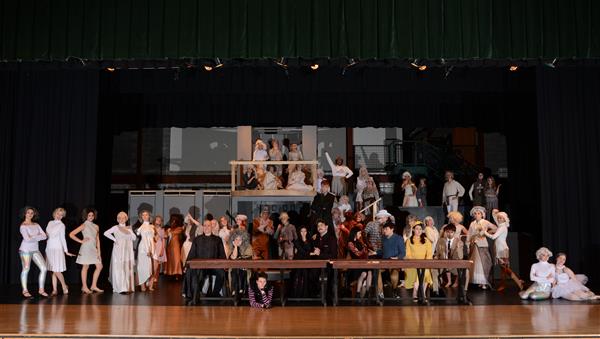 “We thought this show would be so much fun for the kids and parents to work on this year,” said Director Sarah McGraw. “It is unlike anything we have done in the recent past, and it complements the talent of our cast, orchestra and crew. It's a very funny show, the music is great and the dances are full of life. It has varied styles of both music and dance and the cleverly written scenes are fun to watch for audiences of all ages.”

The story revolves around dark and morbid Wednesday Addams, played by senior Paige Nelson, who is 18 and has fallen in love with Lucas Beineke, played by sophomore Logan Krushinski. If this was just any family, having their daughter find happiness with a sweet, “normal” boy from Ohio would probably be a good thing. But for the peculiar Morticia and Gomez Addams, played by seniors Meghan Wilson and Thomas Andrews, they’re trying to figure out where they went wrong in raising their daughter.

To make matters worse, Wednesday has invited Lucas and his parents Alice and Mal, played by senior Hayden Unitas and junior Victor Williams, over for dinner. The evening is filled with everything from mixed-up potions to a sizzling tango.

“We are all excited to perform a contemporary show this year, especially one with so much heart and humor,” said Producer Kathy Morrissey. “We knew when we chose this show it would be a perfect fit for this group of students, and they have not disappointed us. They all have such an incredible work ethic and they are learning so quickly. We can't wait for everyone to see this amazing production!”

McGraw echoed those sentiments, saying that there are challenging aspects of the show that helps the kids grow in their performance abilities.

“Since we rehearse for several months, the musical score will help hone their skills as they learn complex harmonies and different ways to shape their tone, not to mention expand their vocal ranges,” McGraw said. “The character of Lurch has to be over 7 feet tall so that the actor must learn the skill of walking on stilts!  There are great dance numbers as well, so students are developing their dance moves, including tap.”

The cast includes 52 Pine-Richland High School students, and the show features a 21-member student orchestra, and an all-student stage crew. The ensemble is comprised of several ghostly ancestors who McGraw said are actively involved in many scenes throughout the show. She said the set is creatively interactive on the stage and off, and the costuming is “off the chart amazing!”

The Addams Family is a musical comedy with music and lyrics by Andrew Lippa and the book by Marshall Brickman and Rick Elice. The show is based upon The Addams Family characters created by Charles Addams’ cartoon characters. The musical opened on Broadway in April 2010 with Nathan Lane as Gomez and Bebe Neuwirth as Morticia, and a subsequent national tour ensued. 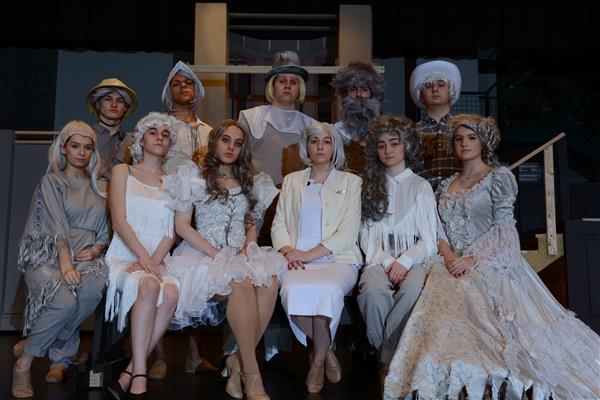