Five Individuals & One Team Inducted into Athletic Hall of Fame

Nearly 150 people came out to recognize five individuals and one team for the first-ever Pine-Richland High School Athletic Hall of Fame Banquet. On Friday, Oct. 4, 2019, the inductees were recognized at the PRHS Football Game and then at a special banquet on Saturday, Oct. 5, 2019. Inductees included:

Class of 2007 Athlete
Meghan Klingenberg excelled in the sport of soccer at Pine-Richland High School.  Ms. Klingenberg led Pine-Richland to WPIAL Soccer Championships in 2005 and 2006. The 2005 Pine-Richland team captured the Pennsylvania State Soccer Championship.  She was named to the Pennsylvania All-State Soccer Team and was selected as a Parade All-American. Ms. Klingenberg attended the University of North Carolina where she was a four-year starter and was selected first-team All ACC.  Ms. Klingenberg represented the United States as a member of the Women’s National Soccer Team and went on to win the 2015 FIFA Women’s World Cup. She also represented the United States as a member of the US National Olympic Team.  She currently plays professional soccer for the Portland Thorns in the National Women’s Soccer League. Ms. Klingenberg resides in Portland, OR.

Jack McCurry – Class of 1967 Athlete
Jack McCurry was a two-sport athlete at Richland High School where he earned six varsity letters in football and track. In 1965 and 1966 Mr. McCurry led the Rams in scoring, rushing and pass receiving.  He was named MVP in both 1965 and 1966 and received all-conference and WPIAL honors. Mr. McCurry attended Edinboro University where he received All-American honors and his team captured the 1970 Lambert Bowl.  He was also named to the PSAC first-team all-conference team. Mr. McCurry was inducted into the Edinboro University Athletic Hall of Fame in 1984 and named to the Edinboro’s All-Time Football Team. Mr. McCurry has coached scholastic football for 35 years and amassed 281 victories, won 16 conference titles and four WPIAL Quad-A titles and a Quad-A State title.  His 1987 football team was selected as the number one scholastic team in the country and named National Scholastic Champions and he was selected by USA Today as the National Scholastic Football Coach of the Year. Mr. McCurry has been inducted into the Pennsylvania Scholastic Football Coaches Hall of Fame, Western Pennsylvania Sports Hall of Fame, WPIAL Sports Hall of Fame and the North Hills Sports Hall of Fame.  Mr. McCurry and his wife Beth reside in Gibsonia, PA.

"In 1978, Jack began coaching high school football and created a coaching legacy at North Hills High School for 35 years that positively touched and influenced many student-athletes.  One of those student-athletes was Eric Kasperowicz, our current head coach of ram’s football.  Eric stated that Jack Mccurry was one of the best high school coaches in the country, if not the best.  Eric also indicated that he learned many values and lessons from jack that he used as a player and still uses today as a coach." - Master of Ceremonies Michael Young.

"In 1969 and in 1970, Coach Sullivan took a group of boys, coached them, mentored them, built relationships with them, and produced back to back championships with them. "  - Master of Ceremonies Michael Young.

Neil Walker - Class of 2004 Athlete
Neil Walker was a three-sport athlete at Pine-Richland.  He participated and excelled in football, basketball, and baseball and led the Rams to the state playoffs in both football and baseball.  Mr. Walker received all-state honors in 2003 and 2004. He was selected as the Pittsburgh Post-Gazette’s Male Athlete of the Year in both 2003 and 2004 and the Gatorade’s Pennsylvania Player of the Year in 2004.  He was also the number one ranked scholastic baseball catcher in the nation in 2004. Mr. Walker was drafted in 2004 as MLB’s 11th over-all selection by the Pittsburgh Pirates.  He has played professionally for the Pittsburgh Pirates, New York Yankees, New York Mets and other MLB teams.  He is currently playing for the Miami Marlins. His professional baseball career continues to reflect athletic excellence.  Mr. Walker and his family reside in the Pine-Richland School District.

"Through all of these amazing athletic accomplishments during his high school playing days, Neil maintained a gracious and humble persona, as he does today.  He was then and continues to be an admired role model." - Master of Ceremonies Michael Young.

"We each have fond memories of our high school days that we cherish, and tonight the Pine-Richland Athletic Department is very proud to honor that lasting memory that the 1969 Rams Football Team has provided."  - Master of Ceremonies Michael Young. 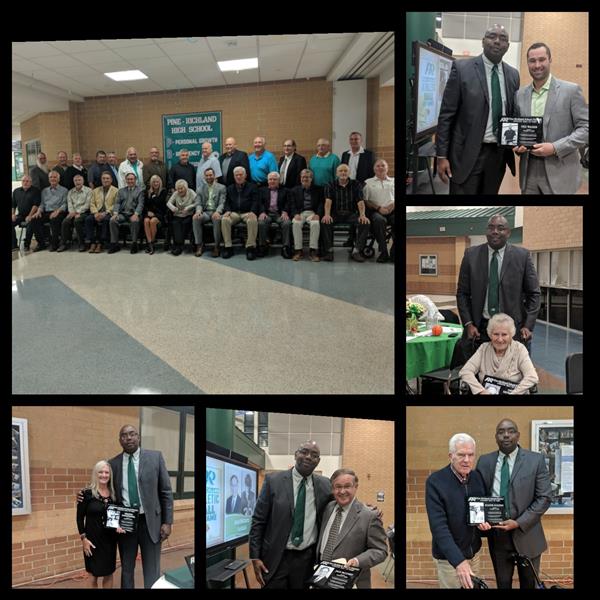