Cheer on Athletes as They Seek Championship Titles

Cheer on our teams and athletes as they compete for top honors at WPIALs, PIAAs & in Sections. (If we missed your athlete's or team's accomplishment, please email information to rhathhorn@pinerichland.org.

Boys Basketball
Congratulations to the coaches and players. The Pine-Richland Boys Basketball Team made it to the second round of the Pennsylvania Interscholastic Athletic Association (PIAA) Championships. They played Allderdice High School  on March 9, 2016. Allderdice took the win 75-60.  Read the recap in the Trib. The Rams, WPIAL champions, beat Bethel Park 81-57 in the first round of  on March 5, 2016.  Thank you for the PR Basektball Boosters for selling tickets for the second round on March 8, 2016. Junior guard Andrew Petcash is in the running for the Tremendous Twenty. Vote here.

Girls Basketball
The Pine-Richland High School Girls Basketball Team  earned a chance to play in the second round of the PIAAs. They came up short against North Allegheny on March 8, 2016.  The final score 46-38. Read more in the Trib by clicking here.  The Lady Rams won its first PIAA playoff game since 1999 with a 61-39 win over Warren High School in the first round of Class AAAA contest at Erie's Villa-Prep Events Center on March 4.  Read more in the Trib. The team finished third in the WPIALs. Photo courtesy of Madia Photography.  Junior guard Amanda Katlin  is in the running for the Tremendous Twenty. Vote here.

Track & Field
Congratulations to Pine-Richland High School senior Joey Kelly placed fifth in the Pole Vault with a vault of 14' at the Pennsylvania State Indoor Championships on February 28, 2106. The meet was held at Penn State University. 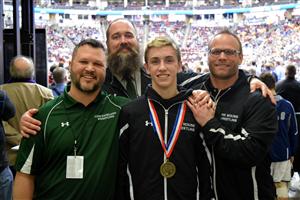 Pine-Richland High School junior Hunter Baxter earned fourth place at the PIAA State Wrestling Championships at Giant Center in Hershey, PA March 11-12, 2016.
Also qualifying for the state championships was senior David Kelly.
In all, five boys from the PR Varsity Wrestling Team participated in the South West Regional/WPIAL wrestling championships at Penn Hills High School March 4 - 5, 2016.
Junior Hunter (120 Pounds/WPIAL Runner-Up) and senior David Kelly (152/WPIAL Runner-Up) in the top four represented PR and the WPIAL and then the PIAA tournament. The boys were ranked in the top 20 at their weight in the state.
The following wrestlers participated earned a spot at the WPIALs in their weight category: 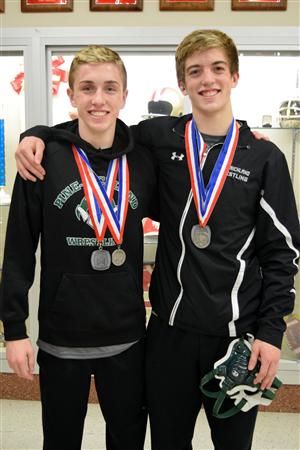 
1995 - Jeremy Lengle - 110 career wins
2008 - Sam Brehm - 118 career wins
Junior Hunter Baxter earned his 100th varsity career win February 27, 2016.  100 wins in the wrestling world is comparable to scoring 1,000 career points in basketball. The WPIAL actually tracks and publishes a list of all wrestlers who accomplish this milestone before graduation.   To date, only three other wrestlers in the history of Pine-Richland High School and Richland High School have ever accomplished this goal before graduation. In addition to Hunter, the following wrestlers who earned this accolade include:

In addition, Hunter is the first PR wrestler ever to earn his 100th career victory before the end of their Junior year.  He stands a very good chance of breaking the all-time win record since he will have one more full year to compete. 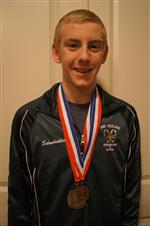 Several students including Ryan swam at the WPIALs. They included:

The WPIAL swimming championships was hosted on March 3at the University of Pittsburgh’s Trees Pool.

Sophomore Mallory Charles finished third at WPIALs and ninth at the PIAAs and ninth grader Maddie Huit finished fifth at  the WPIALs and 11th at PIAAs. Both competed at the PIAA meet at Bucknell University on March 16 - 17, 2016.  Sophomore Austin Shaw finished eighth.  All divers placed on the podium and scored points to the overall team scoring for the competition.

Fencing
The Pine-Richland Fencing Club Boys Team led by starters Matt Lacek (Team Captain), Noah Stewart, and Matt Di, won the Bronze Medal at the High School Championships, and finished the regular season tied  for first place in the Pittsburgh Interscholastic Fencing Association (PIFA), winning 8 matches vs. only 1 loss.  Each match consists of nine  head-to-head bouts, fought by the three starters.  The boys team won the Bronze Medal after falling to Winchester Thurston in the semifinal round of the Championships on March 4, 2016 after a hard-fought match.

The girls team of the Pine-Richland Fencing Club, led by Skyla Bruno,  Camille Patrignani, and Martha Lacek, finished the regular season with a  record of 6-3 in meets. They tied for fourth place and just missed  qualifying for the playoffs due to tie-breaking rules in a bid to repeat  their 2015 Championship season.

Ice Hockey
Good Luck to the two Pine-Richland High School Junior Varsity and two Pine-Richland Middle School Ice Hockey teams as they begin their run at the PIHL Post Season Tournament next week.
Congratulations to the JV1 ice hockey team for their 3-1 win over  Peters Township on March 17 at 7:40 p.m. at the Rostraver Ice Garden.  They move on to the semifinals on  March 23 at 6 p.m. at the Ice Castle.
MS1 Ice Hockey Team beat  Greensburg Central at the Bethel Park YMCA 3-2 in overtime. The team took on Greater Latrobe on March 21 at the Ice Castle Middle school and  lost 3-2.
JV2 had a bye the first round and played March 17, 2016  at Airport Ice Arena and lost 5-3. 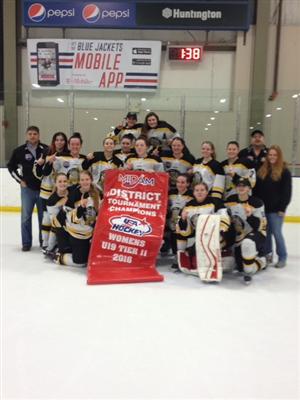