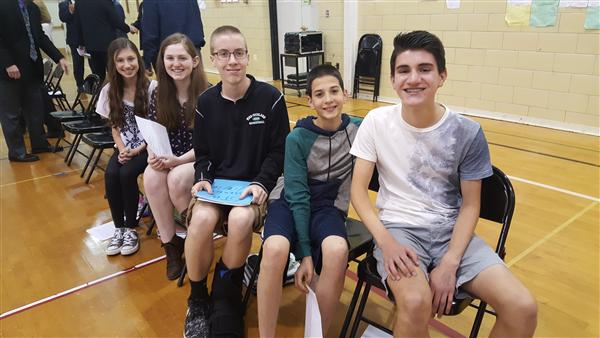 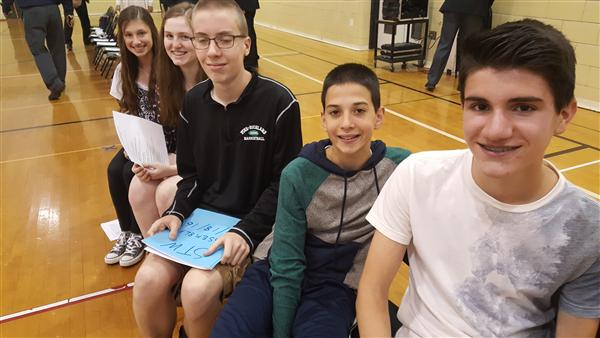 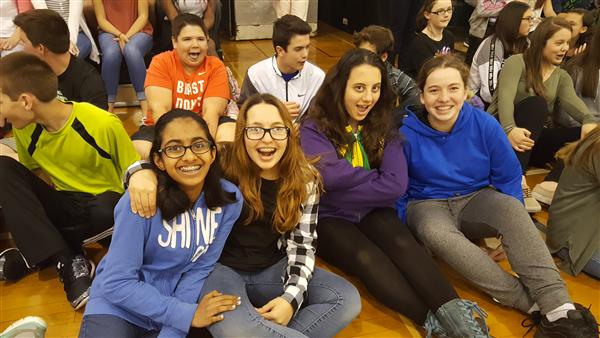 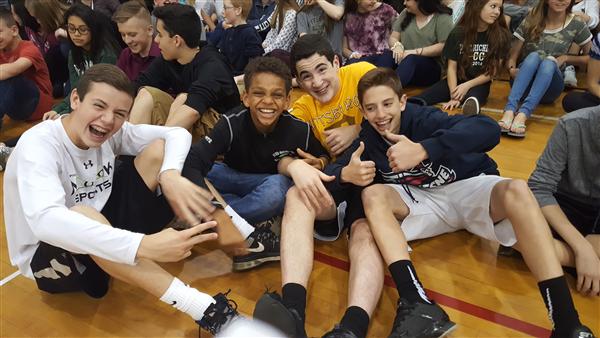 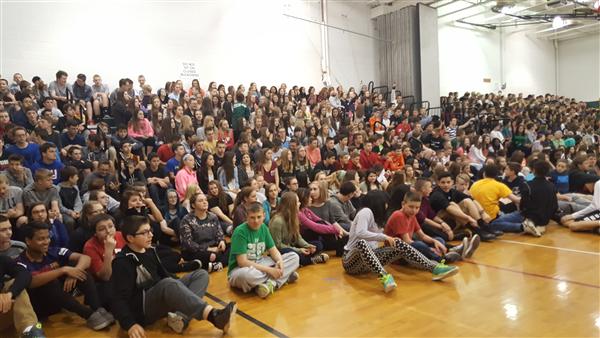 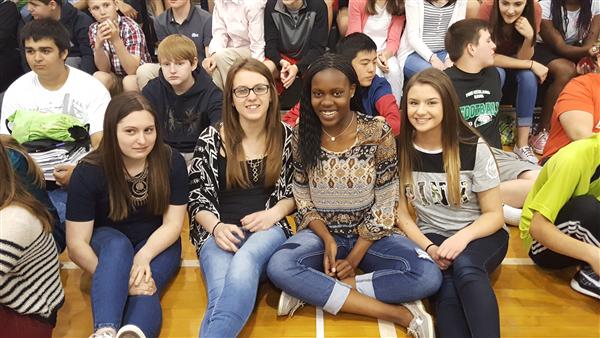 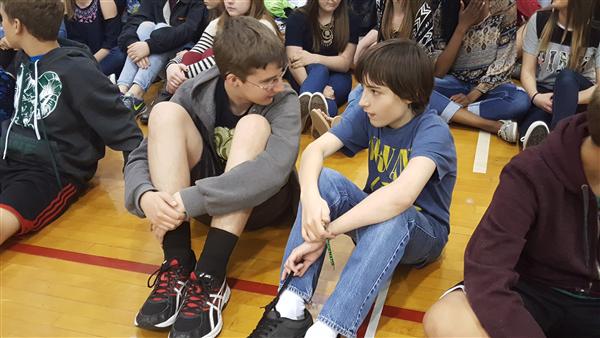 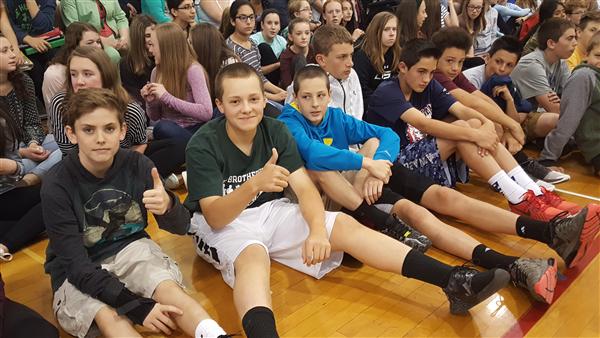 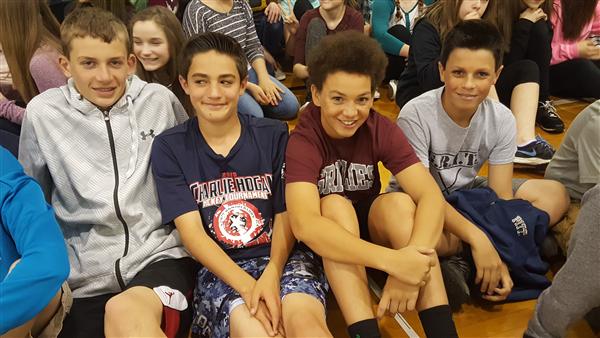 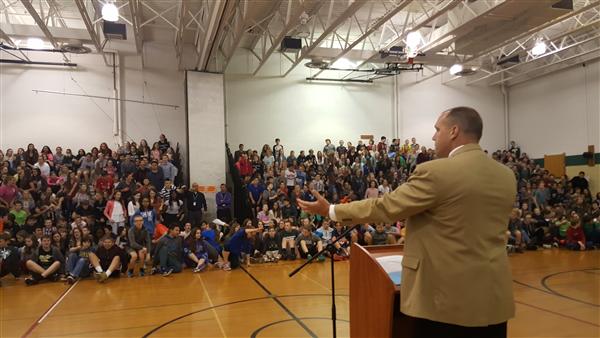 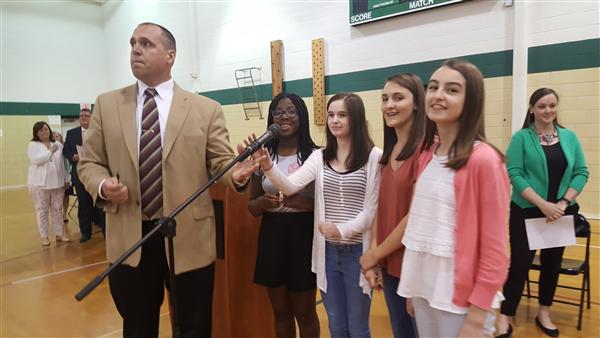 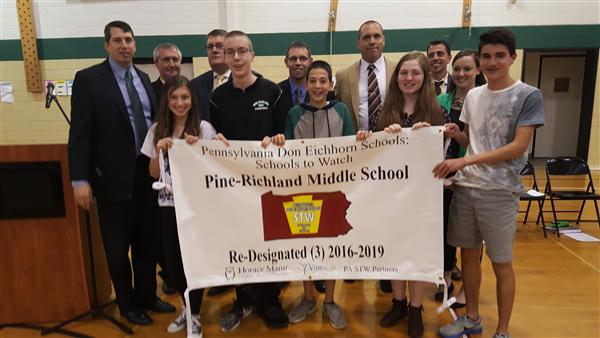 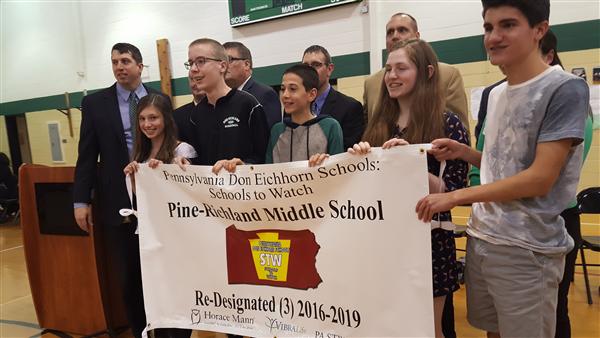 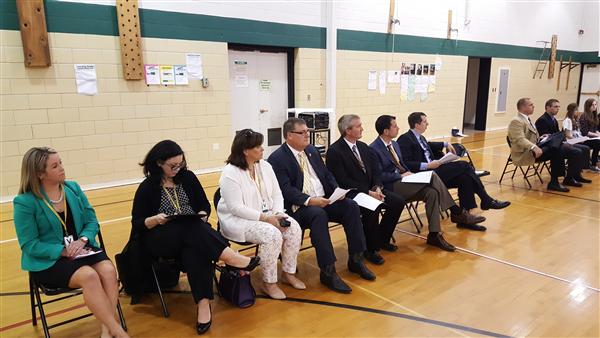 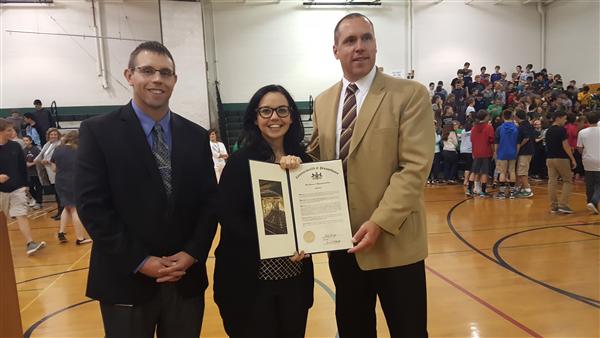 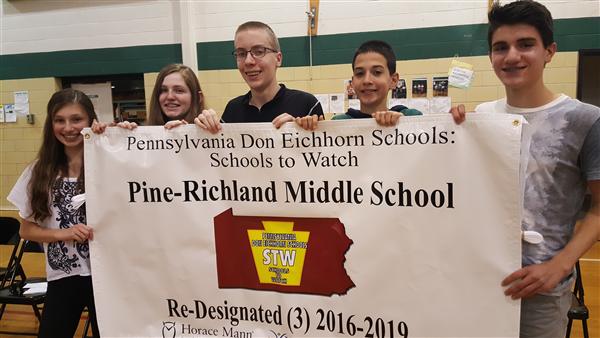 Pine-Richland Middle School celebrated being re-designated an exemplary middle school in the Pennsylvania Don Eichhorn 2016 Schools to Watch program for a third time. Students, staff and Schools to Watch team members highlighted the achievement on May 18, 2016.
"I like programs like the Schools to Watch," said Superintendent Dr. Brian Miller. "It gives us an opportunity to hold up a program against  a set of criteria. The process is dynamic and it is not fixed or static. Great schools change and improve."
Student Erin Ahern kicked off the student speakers by reminding everyone that "being a Pine-Richland Middle School student takes pride."
"The Schools to Watch program takes this pride to a new level,' She said. "We are PR, a School to Watch!"
Principal David Kristofic said that this is the third time the team has re-designated PRMS as a School to Watch. The school earned national recognition by being designated a “School to Watch” originally in 2007 and was re-designated in 2010, 2013 and now in 2016.In addition, PRMS earned the Don Eichorn Award for Outstanding Middle School in 2004.“We are truly proud to earn a third honor in the Don Eichhorn ‘Schools to Watch’ Awards program,” said Dr. David Kristofic, principal. “Our students, staff and parents make this school the place to be.”
Dr. Kristofic extends appreciation to staff members who helped administrators in the re-designation process. They included teachers Robert Bartell, Erika Graham, Jeffrey Paul, Kate Pfeifer, Jason Prucey, Kristy Rush and Sarah Thearle and staff members Debbie Klodowski and Lynn Ross.
School to Watch State Director Bruce Vosburgh and STW Team sponsors Joe Maddalon and George Pry and Ms. Sara Bresnahan Kennedy from State Representative Mike Turzai's Office participated in the program. Teacher Kate Pfeifer spoke about some of the projects students work on outside of school to show they care which included Paws in the Park in which the students and staff earned a  "Make a Difference" award.  Eighth grader James Rekowski spoke about Saturday Service Day which included visits to St. Barnabas and Animal Friends.  Also helping speak at the program was seventh grader Tannah Hendrickson and eighth graders  Petros Balouris and Daniel Krill. Assistant Principal Ashley Boyers closed out the program
Dubois Area Middle School in Dubois, also earned a third re-designation and earned the title nine years ago with Pine-Richland Middle School, the first two schools to be recognized in the program.Locally, Elizabeth Forward Middle School was re-designated for a second time, and Highlands Middle School, Ingomar Middle School and South Fayette Middle School were among the six newly designated Schools to Watch in 2016.The six schools join 28 other Pennsylvania middle-grades schools recognized previously. The six newest schools as well as the six re-designated schools will be recognized at the Pennsylvania Association for Middle Level Education State Conference at the Penn Stater Conference Center in State College on February 28, 2016.The Pennsylvania Association for Middle Level Education, Duquesne University, Edinboro University, Shippensburg University, Horace Mann Service Corporation, and Vibra Life, the Pennsylvania “Schools to Watch” team in partnership with the Pennsylvania Department of Education, made the announcement.State leaders select schools that exhibit academic excellence, responsiveness to the needs and interests of young adolescents, and commitment to helping all students achieve at high levels.In addition, schools must show evidence of a strong leadership team in which teachers and administrators work together to improve curriculum and instruction and commit to being held accountable for continuous improvement.Dr. Irv Howard, Past President of the National Forum stated, “We congratulate these schools for being places that do great things for all of their students. These schools demonstrate that high-performing middle grades schools are places that focus on academic growth and achievement. They are also places that recognize the importance of meeting the needs of all of their students and ensure that every child has access to a rigorous, high-quality education.”National Forum Schools to Watch Oversight Committee Chairperson Linda Hopping explains that selection is based on a written application that required schools to show how they met criteria developed by the National Forum. Schools that appear to meet the criteria are then visited by state teams, which observe classrooms, interview administrators, teachers, students, and parents, and looked at achievement data, suspension rates, quality of lessons, and student work. Schools are recognized for a three-year period, and at the end of three years, they must demonstrate progress on specific goals in order to be re-designated. “Schools to Watch” requires schools to not just identify strengths, but to also focus on areas for continuous improvement; thus the three-year re-designation.Launched in 1999, Schools to Watch began as a national program to identify middle-grades schools across the country that were meeting or exceeding 37 researched based criteria developed by the National Forum. The Forum developed a web site (http://middlegradesforum.org) that features online tours of schools, as well as detailed information about the selection criteria used in the recognition program. There are now 17 states across the country, which have trained Schools to Watch State Teams, with more than 4,000 schools recognized across the country. “We are pleased that our Schools to Watch program has shown that schools can meet high academic expectations while preserving a commitment of healthy development and equity for all students,” said Ericka Uskali, National Forum Executive Director. “These Schools to Watch are indeed special; they make education so exciting that students and teachers don’t want to miss a day. These schools have proven that it is possible to overcome barriers to achieving excellence, and any middle-level school in any state can truly learn from their examples,” Uskali said.The National Forum sponsors the Schools to Watch program along with the Association for Middle Level Education, the National Association for Elementary School Principals, the National Association of Secondary School Principals, Learning Forward, ASCD, and State Schools to Watch affiliates.The National Forum to Accelerate Middle-Grades Reform is an alliance of 65 educators, researchers, national associations, and officers of professional organizations and foundations dedicated to improving education in the middle grades.