PRHS Teacher Honored Along with Graduate 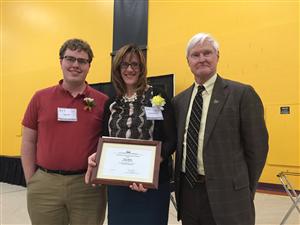 A 2012 Pine-Richland graduate and current educator are making headlines at the Rochester Institute of Technology.

PRHS graduate Evan Klei, who will graduate from RIT this year, was among 117 college students whose academic and personal achievements have made them this year’s Outstanding Undergraduate Scholars.

The students were given bronze medallions during a ceremony on April 7, 2016. Honorees had to earn a minimum grade-point average of 3.85 out of 4.0; completed more than two-thirds of the credit hours required for a bachelor’s degree and demonstrated community engagement, whether it be creative work, serving on student committees, participating in civic activities, working and/or conducting independent research.

In addition, the honorees were allowed to nominate a high school teacher who had an impact on his or her academic career. Evan chose Teacher Valerie Klosky for this honor. Mrs. Klosky was Evan’s computer science teacher at PR and helped him develop his computer skills. The description of the award for the student is as follows:

“RIT is pleased to pay tribute to these undergraduates whose demonstrated devotion to excellence is an inspiration to the university community,” said Jeremy Haefner, RIT provost and senior vice president of Academic Affairs.

Mrs. Klosky joined Evan as he was recognized at RIT.

“It is an honor and incredible opportunity to share in the journey of Evan who first developed a love of computer science here at Pine-Richland and who nurtured and developed this passion in college to become a top performer at RIT,” said Mrs. Klosky.

Evan will earn a bachelor of science and master of science in computer science with a minor in statics from RIT’s B. Thomas Golisano College of Computing and Information Sciences.

Evan (far left) is shown in photo above with Mrs. Klosky (center) and Dr. William W Destler, president of RIT.