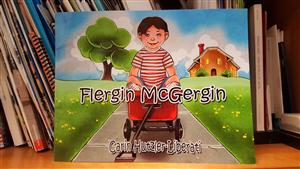 For years, she has enthusiastically helped children read through the use of song and rhyme. Now, Mrs. Carin Hutzler-Liberati is sharing that same enthusiasm for rhyming and reading with the world through a tale about a young boy and his desire for a puppy.  Mrs. Liberati, who is a teacher at Hance Elementary School, recently published the book “Flergin McGergin.”

So why a rhyming book? Mrs. Mrs. Liberati says rhyming is an early emergent skill associated with phonemic awareness, which is the ability to hear and manipulate sounds without seeing letters in print. This skill is an important one because it’s a precursor to phonics. Students who are phonetically proficient tend to be successful readers.

The idea for her main character came when she was playing a game with her young sons Miles, Mario and Roman. She would read a favorite book to them at bedtime and play a rhyming game. She would say a real word and they would give her a rhyming word or a nonsense word. One night, her youngest son Roman said, “Mom, are you Flergin McGergin?” She responded by saying “Flergin McGergin, the little boy said!”  That’s how the character was created. 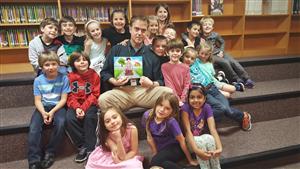 She dedicated her book not only to her children, but to her parents who sang and read to her throughout her childhood. The illustrations were done by Ms. Renee Biertempfel with the original concept created by Ms. Susan Hutzler-Venatta and Ms. Gia Liberati.

Mrs. Liberati has been teaching in the Pine-Richland School District since 1991. She has had the privilege to teach at all of the primary schools in Pine-Richland including Hance Elementary School, where she is a reading specialist. In the past, she has taught kindergarten and first grade.

She holds a Bachelor of Science Degree in Education from the Indiana University of Pennsylvania and a Master of Education Degree in Reading from the University of Pittsburgh.  She was named as a finalist in the 2012 PA Teacher of the Year program and a semifinalist in the 2011 program. Mrs. Liberati was inducted into the Allegheny Valley School District Alumni Hall of Fame in 2013. She is the founder/director of Jeremiah’s Closet, a community clothing bank for those who are underprivileged. She lives in Allegheny County with her husband Dan and their three sons.

All who know Mrs. Liberati associate her with her love and enthusiasm for reading, which now can be shared with the world.