Junior to Participate in Governor’s School for Science 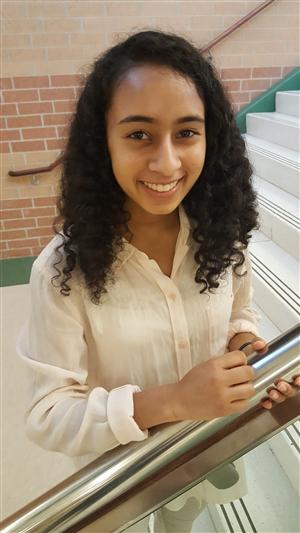 Pine-Richland High School junior Arushi Bandi has been selected to participate in the 2016 Pennsylvania Governor’s School for Science (PGSS).  PGSS was established to provide summer enrichment experiences in the sciences and mathematics for talented Pennsylvania high school students and to encourage them to pursue careers in the fields of science, technology, engineering or mathematics.

In addition, Arushi earned the National Center for Women & Information Technology (NCWIT) Award for Aspirations in Computing. She is only one of 35 across the country to earn this award from NCWIT, which is a non-profit community of more than 650 universities, companies, non-profits, and government organizations nationwide working to increase women’s participation in computing and technology.

NCWIT chose Arushi, because of her computing achievements as well as leadership, academic history, future education plans and potential to contribute to the information technology field.

“This award is an amazing opportunity to connect with other girls just like me across the country,” said Arushi. “The network of women in STEM that NCWIT has created is absolutely incredible. I am so grateful for this award and it feels great to be recognized for the work I've done in this school district to improve STEM opportunities for students, specifically girls. After receiving the award alongside 34 other girls, I am more confident in my abilities going into a male-dominated field. I look forward to becoming more involved in the NCWIT community in future years.”

Arushi became interested in Computer Science during a ninth grade programming class. Being the only girl in the class inspired her to create a middle school FIRST Lego League team to encourage girls to explore STEM careers.  During the summer of 2015, she worked on an algorithm to improve relevant data in Electronic Medical Records. The project was entitled “Using Natural Language Processing to Improve the Prediction of Relevant Data.”  In addition, Arushi submitted an Android app to the PA Computer Fair. The app teaches high school students how to manage their money.

Arushi, who will graduate in 2017, plans to major in computer science.