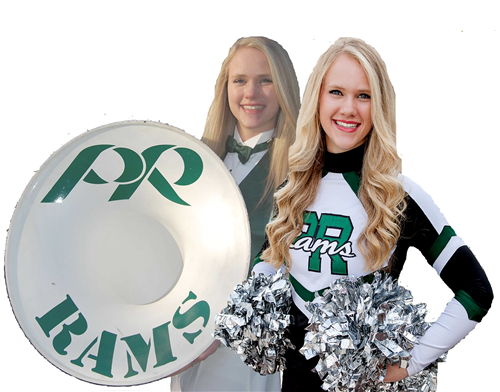 High school can be quite busy for some students, but imagine juggling cheerleading duties and band duties during an already busy school year.

That’s just what one student did. Senior Elizabeth McMurray has been cheering competitively since second grade.

That has always been her first love, but then she discovered band in middle school.

“I joined the band and was asked to play the tuba and become one of the ‘world famous’ dancing tuba girls in middle school,” she said. “It was the greatest, and I met so many friends in the band.  When I got to high school, our band director made it a point to have a meeting and tell all the freshmen families that there was no reason why students couldn’t be in a sport and still be in the marching band.”

That’s no easy feat and is very rare to be both a cheerleader and in the band.  There have only been a few students over the years that tried juggling the two.  In fact, Elizabeth is the only combined PR cheerleader/PR band member to ever perform at every championship venue available to a cheerleader and band member.

Elizabeth said everyone was very cooperative and encouraging as she tackled her two major loves.

“My cheer coaches allowed me to leave at the one-minute mark before half time to go and get my tuba and then get in line with the band,” she said. “I even did this with all of the championship football games.”

She said the band and cheerleading camps were a challenge, because they crisscrossed.

“They both crossed over each other and it made for a very long and tiring week,” Elizabeth said. “Every year, I went to cheer camp all day and then raced home to eat dinner and then went straight to evening band camp from 6-9. It was always in August and so very hot and exhausting!”

Elizabeth says an injury prevented her from cheering at college, but she will still be cheering from the sidelines when she attends the University of Dayton to major in engineering this fall. She doesn’t expect to play the tuba either, but hasn’t completely given up on her cheerleading dream.

“I am still able to cheer on the sidelines but regaining the more complicated tumbling has been difficult,” she said. “However, that doesn’t mean that I won’t cheer later on in college.  I don’t think I will be in a college band but I will always be a big supporter!”