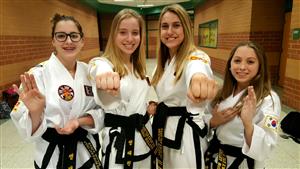 What does it take to earn a black belt in taekwondo? Many years of training, discipline and perseverance.  In fact, four Pine-Richland High School students have achieved more than a black belt. They have earned second and in some cases third degree black belts.

Earning a first, second and third degree requires many years of training. The four ninth graders have been training since they were nine years old at Zang TKD in Warrendale, where they practice 2-3 days a week.  They train under the direction of seventh degree black belt Grand Master Robert Zang.
To earn a black belt, students are required to learn technique in forms, sparring and board breaking.  The discipline teaches self-defense techniques and leadership qualities. They also live under the tenets of Integrity, Modesty, Courtesy, Self-Control and Indomitable Spirit.