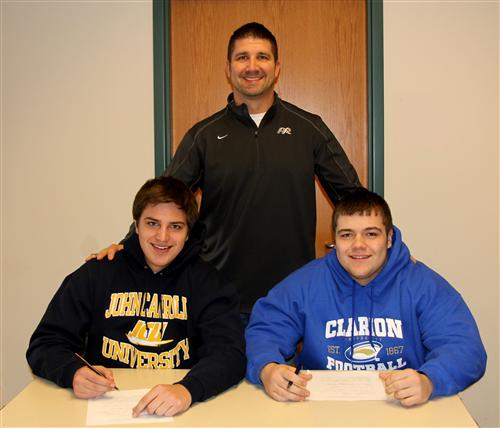 Two Pine-Richland High School seniors are signing with two universities. Senior Chris Selong will be attending John Carroll University in University Heights, OH to study Chemistry. He is planning to play football this fall. He was a tight end and defensive end for the PRHS Football Team. For John Carroll, he plans to continue his role as a defensive end and an outside linebacker. He is currently on the high honor role. He has most enjoyed being part of the football team.

Senior Jake Leone is also signing with Clarion University of Pennsylvania. He is the captain of the PRHS Football Team and served as center and nose tackle. For Clarion, he will also serve as a center. He currently is an officer in the Best Buddies Program. He is most proud of being part of the football team and having great coaches as role models.

Head Football Coach Eric Kasperowiczis proud of these student athletes for developing as young men and role models to other students. He says they are not only excellent football players, but strong students.