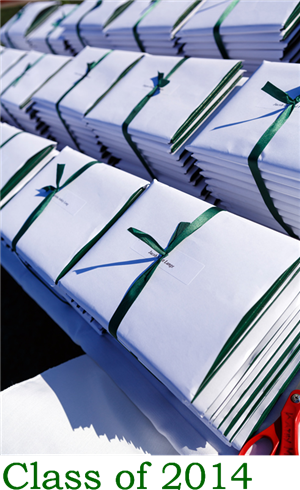 Graduation is still a-go at stadium! Any changes would be communicated via rapid call.
Nearly 370 Pine-Richland High School seniors will become graduates on Friday, June 13, 2014. The PRHS Class of 2014 will be hosting commencement exercises at 7 p.m. at the PRHS Stadium, 704 Warrendale Rd. in Gibsonia.

Watch the ceremony live on PR-TV via Armstrong Cable Digital Cable 211 and regular cable channel 50 and Consolidated Cable Channel 404 or via the internet at pinerichland.tv.

Finalists include seniors Rachel Halliday, Monica Lacek, Jennifer Lott, Lena Ogiwara and Kyle Pomerleau. Those same students were named “semi-finalists” this fall and were among 16,000 students recognized across the country.  About 90 percent of “semi-finalists” are named “finalists” in the program. In addition, seniors Meher Babbar, Kristen Baxter, Lauren Brown, Sonali Dadoo, Sara Dugan, Tyler Fitzgerald, William Misback and Margaret Shope were named “Commended” students this fall.  The National Achievement Scholarship Program also named senior Edem Akwayena as an “Outstanding” participant in the 2014 program. She scored in the top three percent of more than 160,000 African Americans.

In the event of rain, ceremony will be delayed and in the event of extreme inclement weather, the ceremony will be held indoors in the PRHS Auditorium. Graduates will be notified by rapid call if that is the case. If held indoors, each graduation participant will be allowed two guests, who must present tickets. Each graduation participant was given two guest tickets.

If a student has additional guests, they will be able to watch the ceremony via live television from multiple locations in the high school or through their cable provider in the comfort of their home in the Pine-Richland School District.